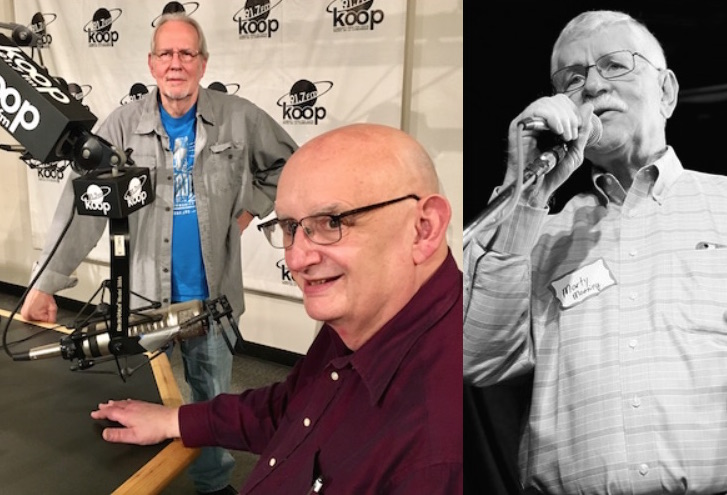 On the weekend of February 13-15, 2019, several dozen youngsters who worked at KPFT-FM -- the Pacifica Foundation-owned radio station in Houston -- during the mid-1970s, gathered at several Houston sites, including the historic Anderson Fair acoustic venue, to hold a reunion. It was a rousing success. During the ‘70s, KPFT was one of the most radical and innovative radio stations in the United States. On Rag Radio, radio gurus Larry Yurdin and Marty Manning join host Thorne Dreyer to discuss the glory years of KPFT as well as the evolution of the radio medium and the new media that have evolved since. Yurdin, Manning, and Dreyer each served as general manager of KPFT during that period. This interview was recorded after the reunion and was first broadcast on KOOP in Austin on March 22, 2019. KPFT -- whose innovative approach (which veered from Pacifica's traditional block programming) included a platform of roots music and what would become known as Americana music, interwoven with creative news and information programming -- also played – with its “Cosmic Cowboy” concerts featuring Willie Nelson, Jerry Jeff Walker, Michael Murphy, Leon Russell, Kinky Friedman, and more – a major role in coalescing and giving visibility to the new "progressive country" and "redneck rock" phenomena. Larry Yurdin, who masterminded the transformation of Houston’s KPFT, also helped start KSML in Lake Tahoe, formatted KFAT in Gilroy, California, the first "Americana" station, and created “The Daily Planet,” a feature heard 12 times a week on over 200 radio stations – and played major roles at several other radio operations. He was a concert promoter in Northern California, producing shows with talent like Neil Young, Jerry Garcia, B.B. King, and Tina Turner. He later became a pioneering computer network security consultant and is now “semi-retired.” After serving in such roles as GM, program director, producer, and programmer at KPFT, Marty Manning left the station in 1975, spent some time in Austin, then worked with KFAT followed by two years of “rock and roll” in Cincinnati. Since 1985 he has worked with iHeartMedia’s 99.9FM (KLZI/KESZ) in Phoeniz where he has served in a number of positions including creative director and is now doing primarily public affairs. Rag Radio host and producer Thorne Dreyer worked with KPFT in the early to mid-‘70s, serving as public affairs director, program director, and general manager. For several years Dreyer hosted a show called The Briarpatch and was the original editor of the Mighty 90 News, an underground-style newspaper published out of KPFT to complement and promote the station’s programming.Photos: Thorne Dreyer and Larry Yurdin (left). Photo by Greg Ciotti. Marty Manning. Photo by F. Carter Smith. Rag Radio is produced in the studios of KOOP 91.7-FM, an all-volunteer,  cooperatively-run, solar powered community radio station in Austin, Texas, in association with The Rag Blog and the New Journalism Project, a Texas 501(c)(3) nonprofit. It is streamed live on the Internet at KOOP.org and Radio Free America. The host and producer of Rag Radio, Thorne Dreyer, is a prominent Austin-based activist and writer who was a pioneer of the ’60s underground press movement. The show’s engineer and co-producer is Tracey Schulz and the staff photographer is Roger Baker; Suzy Shelor is Rag Radio associate; Alice Embree is guest host; Glenn Smith and Roy Casagranda are our political analysts, and Evan Hearn is the Rag Radio apprentice. The syndicated show is broadcast (and streamed) live Fridays, 2-3 p.m. Central) on KOOP, and is later rebroadcast and streamed on WFTE-FM in Mt. Cobb and Scranton, PA., on Houston Pacifica's KPFT HD-3 90.1, by KKRN, 88.5-FM in Round Mountain,  CA, and at WALHRadio.com in Wilmington, OH -- and as a featured podcast at Veterans Today. Learn more about Rag Radio here.